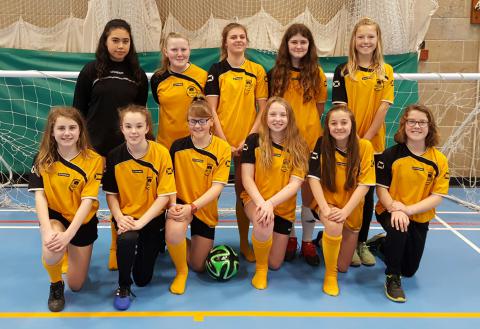 This is the second year in a row this team of girls have become North Devon Champions.

This year they were unbeaten in their pool, beating South Molton, Chulmleigh and Great Torrington, scoring an impressive thirty-eight goals and only conceding one throughout the nine games played. They then faced Bideford in the Final who were the winners of the other pool. Park took an early lead in the first half and then scored another, right at the start of the second half, giving them a 2-0 lead. In the last five minutes Bideford scored to make it 2-1. Last year’s Final against the same team went into extra time so the girls were determined to not let this happen again. They stayed strong and made sure they kept that second goal out! They truly deserved this win!

On the 1st of March the team represented North Devon in the Devon Winter Games. They played eight different schools from across Devon and were a credit to Park School. The girls unfortunately lost the first three games but, once they got going, they drew the next two games and won the last three. The girls have been fantastic this season, playing to a very high standard. There have been some remarkable individual performances and team efforts and their dedication to training has definitely been evident in all of their performances.

Miss Berry would like to congratulate the girls for all of their hard work this year and she is very proud of their achievements!