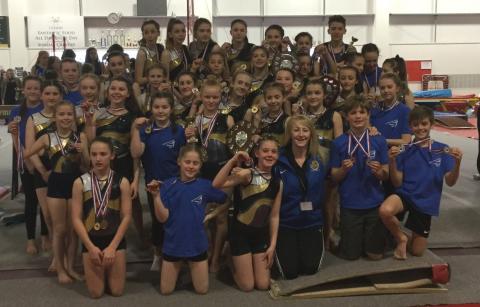 On Saturday 25th March, 41 gymnasts represented Park School at the North Devon Schools Gymnastics Competition, held at Falcons Academy. The gymnasts worked so hard in the lead up to the yearly competition and their effort and dedication absolutely paid off!

The U13 Novice mixed team took to the floor and vault first; for some, this was their first ever gymnastics competition. They came 2nd overall – an outstanding achievement! Libby West and Harriet Jones set the bar high for the boys to follow, with Fin Mead, Reece Herbert and Bob Murdoch certainly living up to this. Two of the boys also won the individual awards in this category, with Fin coming 2nd and Reece 3rd.

Attention then turned to the U13 Intermediate girls and mixed teams. Emily Malek, Robyn Carr, Neah Hamman, Ellen Webber, Jessica Davey and Emily Hicks-Holland worked effectively as team, supporting and encouraging each other throughout. After beautiful floor routines and fantastic vaulting, they walked away with 2nd place. Following in their footsteps was the mixed team, consisting of Daniel Mock, Millie Ayres, Fearne Harris, Lucie Davey, Rhiannon Grice and Katie Elliot. They took to the floor and vault with exceptional performances, resulting in a 1st place gold medal! If this wasn’t enough, Dan Mock went on to get the highest overall male, Millie Ayres matched him with the highest overall female, Fearne Harris gained a well-deserved 2nd overall and Emily Hicks-Holland narrowly missed out on 3rd place overall.

In the 2nd round of competition, it was over to the two U13 Novice girl’s teams to show their talent. This category was by far the most difficult, as they were up against 13 different teams. Taylor Tymon took to the floor and vault first, leading her team of Lucy Braund, Lily Wilson, Keira Furlong and Mia Williams. The girls did particularly well on floor, with Lucy Braund narrowly missing out on the 3rd overall medal in her category. As a team they performed remarkably, gaining 2nd place out of 13! The Park B team then followed, consisting of Amelia Blyth, Millie-Sue Cowell, Gabi Oak, Emily Drury and Charlotte Tucker. For many of these girls, this was their first time competing. They came a respectable 7th out of 13, making Miss Gillard very proud, as each of them performed to the best of their ability in both floor and vault.

After lunch, the U15 novice girls took to the floor and vault. Again, this was a very tough category and we had both an A and B team battling out for the podium. Our A team took to the vault first, comprising Georgia Barrett, Emily West, Rosie Blyth and Emily Hicks-Holland. They were followed shortly by the B team; Fearne Harris, Millie Ayres, Niamh Hughes, Molly-Mae Hingston and reserve Chloe Soper. After an unfortunate mix up by the organisers, the wrong medals were originally given out. Miss Gillard has since corrected this going by individual results concluding Millie A, Fearne H, Emily HH and Rosie B would get the 4 gold medals for scoring the four highest scores with the rest of the girls winning the bronze. Despite the mistake they all did very well and made the podium in such a tough category!

The last team to compete was the U15 Intermediate girls. For Harriet and Poppy Parks, it was their last ever gymnastics competition (as they have now left the sport). The team consisted of Harriet and Poppy, alongside Michelle Kingdom, Emily Blundell, Rebecca Light, Hannah Elliot, Erin Stickley and Jessica Matthews. Michelle was first to vault; after a shaky start, she soon hit her stride, performing a high scoring floor routine. Within the team, Emily Blundell shone for her floor and vault performance – resulting in 3rd place overall. The girls, despite a tough category, finished in 2nd place, which all were delighted with: Park’s podium pictures continued! Well done!

Just when we thought all medals had been given, Emily Hicks-Holland was awarded the ‘Katrina Venner Award for Musical Interpretation’ for her attitude and confidence within her floor dance. Dan Mock also received an award for the highest score on Vault! Park was ecstatic with these amazing results. Miss Gillard would like to congratulate you all once again on your effort and dedication during the lead up to the competition; your behaviour and grace throughout the competition; and for wearing the Park School leotard with pride as you exceeded all expectations. Well done to all.