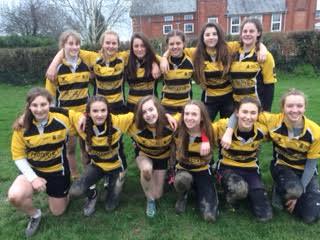 Well done to the U13’s and the U15’s Girls’ Rugby team. Both teams went to Topsham RFC to represent North Devon on 1st March 2017.

The U13’s had a lot of fresh faces to rugby this year and for most of them, this was their second taste of the game. For Xinyua (Anna) Wang 7LE, it was her first competitive game and took to the sport like a duck to water, playing U13’s meant she was playing against Year 8’s and she was awarded Player Of The Tournament. Rheanna White 8LS captained the side and although received some hard hits herself, kept the heads up of her team as they played against some hard opposition.

The U15’s joined forces with Chulmleigh (due to Yr11’s being too old to compete) and produced a very strong squad. Although juggling so many players was a bit of a challenge, the Captain Caitlin Turner 9BK played throughout and showed the girls what hard work and dedication can produce. Many girls are now playing for local sides at either Bideford RFC or Barnstaple RFC and are coming on from strength to strength. Special mentions to Keira Worrall 9LK, a new student this year who clearly lives and breathes rugby; Bethany Roberts 10LI who has shown a steep progression over the past year; Madison Ballinger 10LK who has shown real promise with her dedication to training. The girls missed out on the semi-finals by 1-point despite only losing 1, drawing 1 and winning 3 matches. As usual my verbal feedback on the side line was loud and enthusiastic but I was so proud of the girls who dug deep, especially in the last game. Mrs Markham