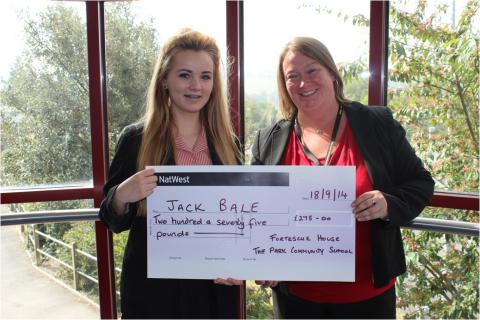 Last year former Park Community School student Jack Bale, aged 18, who currently holds the title of Junior Male 3P British Rifle shooting Champion, contacted Park School to ask if there was any possibility of helping him fundraise to help cover training, travelling and equipment costs. Jack shoots 10m air rifle and .22 rifle at 50m for Great Britain Junior Squad and TENS Academy and hopes to bring home a gold medal from the Olympics in 2020 in Japan. To achieve his goal he is determined, focussed and dedicated to his training and improving his technique for the perfect shot. However, as shooting is a minority sport it has to be self-funded, there is no government or lottery funding available. Jack even had to buy his own Great Britain tracksuit when he made the Great Britain squad!

At Park School he belonged to Fortescue House and after receiving Jack’s letter requesting support, Fortescue House arranged a series of House-based events to help him. Each tutor group were involved in holding cake and milkshake sales around the school, raising a total of £275.

Jack is currently studying at Cardiff University, so on behalf of Jack, a cheque was presented to younger sister Emily Bale (year 11), also part of the Great Britain Junior Squad and TENS Academy. Good luck to both of them!