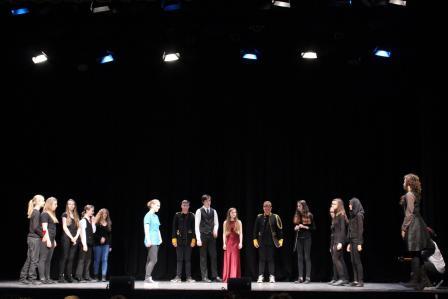 On Wednesday 18th November 2015, the GCSE Drama group took part in the nationally run Shakespeare Schools Festival. Performing an edited version of Hamlet on stage at the Queen’s Theatre was both a daunting and exhilarating experience for the cast.

After two months of rigorous rehearsals, the pupils were finally able to show off all of their efforts.  And what a fabulous performance!  Ella Farrow-Mann played Hamlet with aplomb;  she conveyed the desperate emotions of Hamlet with a quiet assurance on the soliloquies whilst giving the audience intense drama in her actions. Ellen Manansyah played Ophelia with grace, Nathanael Jones was an intimidating Claudius, India Dunkley showed Gertrude’s fear expertly, Shana Hutchings portrayed the pomposity of Polonius, Ionia Green was fearsome as Laertes and Fletcher Robinson successfully treaded the line between tragedy and comedy to give an entertaining, yet honest, performance of Horatio.

The rest of the cast made up the ensemble, creating strong images of the play’s key moments as well as emphasising the fear and grief that is central to this play through their reactions.  The ensemble were played by Emily Brooks, Isabelle Brophy, Benjamin Cattermole, Mahmuda Chowdhury, Daisy Johns, Bailey

Well done to the whole cast!

“This was a great experience for students to perform on stage at The Queen’s Theatre, which we were told on the night was one of the biggest venues to feature in this year’s festival. To see so many students excel in their individual and ensemble performances was a pleasure to watch. The audience really enjoyed the production and the students should be proud of their achievements.”