U12 ND Schools Netball A & B Champions 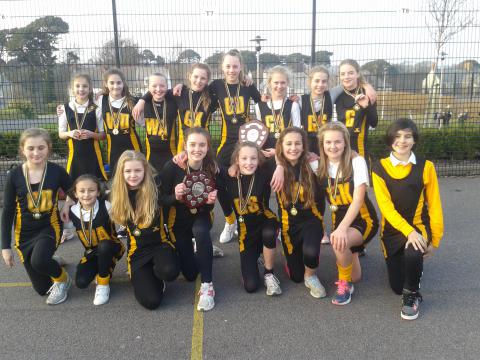 Both the A and B Team won their tournament
On Tuesday 17th March, the North Devon Schools Year 7 Netball tournament took place. The tournament consists of an ‘A’ and ‘B’ tournament with 8-12 schools entered for both tournaments.

Miss Webber took the B team and they started their tournament with West Buckland first (not a good draw to start). Although tough opponents, they only lost by 1 goal which instantly gave a boost to the team as they knew this was probably going to be their toughest opponents. They continued the tournament coming second in there pool. This left them to play Braunton in the semi-final, another close game but successful one! After all their hard work, they then had to face…. West Buckland again in the final! With a little more practice and a lot more determination they reversed the previous score to win! This is only the second time ever of the history of this tournament that Park School have won this tournament; the last time was 2012. A fantastic achievement!

Mrs Markham took the A team who were in a pool of 6, with 2 teams that they had beaten in the league comfortably, 1 team that they had beaten but not so comfortably and 2 unknowns. West Buckland was in the other pool so they stayed confident, kept to a solid rotation and kept their composure, even when the opposition pushed their tactics. They ended up winning their pool and at this point the B team were celebrating their success so the pressure was on! Then they found out who they faced in the semi-final…. West Buckland!! Miss Webber took over the umpiring and Mrs Markham assumed her favourite role – shouting on the side line! Suddenly they were faced with a challenge and played out of this world to win by 2 goals. The final saw them playing Pilton; a team they had beaten in the league by 6-3 but this was a different day! Pilton took the lead and held the lead right into the second half, when Park stole the lead and with Mrs Markham’s having a heart attack on the sideline… the final whistle blew, they had won by 1 goal!! This is the FIRST TIME Park has won an A tournament within (at least) 10 years if not more across ALL AGE GROUPS! To win one tournament was great but to win the double, is an outstanding achievement.

Well done to both teams for their hard work, team spirit and determination. Especially to the B team captain, Amelia Andrew and the A team captain, Taylor Hawkins.