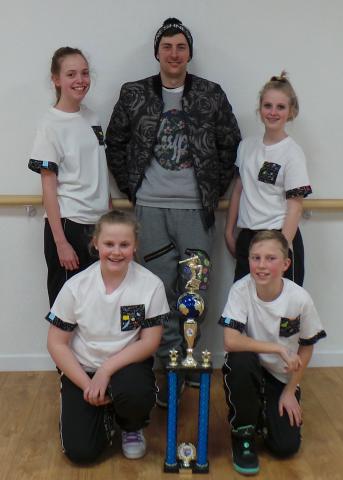 Students Jasmine Turner and Summer Madge (Year 7), Jack Freeman (Year 8) and Charlotte Freeman (Year 10) make up part of “The Solution” team that train at The Unlimited Dance Company.
In August 2014, they took part in the UDO Street Dance World Championships at the SECC Glasgow in the Under 18’s category. They were up against other teams from around the world, and after 2 days of battling for the finals they were placed 2nd.
They have qualified already for the World Championships again this August 2015.
They are now off to Germany in May 2015 to compete at the UDO Europeans Street Dance Championships. They are the only team so far from Devon to compete at this competition.
In April 2014, Jack and Charlie Freeman were part of the Unlimited Dance team to represent England out in Los Angeles at Dance Excellence.