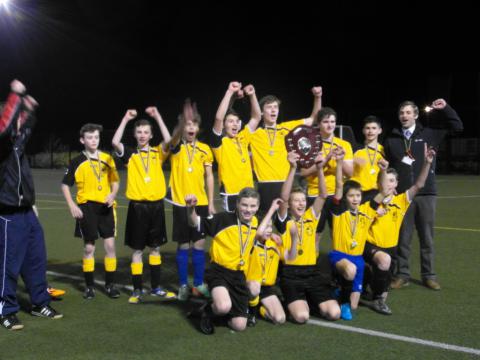 Our Year 9 Boys Football team are delighted to be the North Devon Schools football champions – the match was a ‘6 GOAL THRILLER’ final.

On Tuesday 18th November the team played Pilton in the final at Bideford college. In a re-run of last years final – which Pilton luckily won 2-1, Park opened the scoring when Owen Cox ran on to a long through ball and slotted it past the keeper. Pilton drew level to make it 1-1 at half time.

Park restored their lead when Carter Ward scored from close range from a corner. Pilton again equalised minutes before the end. They then took the lead in extra time . Then with only 1 min before the end of the game, Carter Ward hit an unstoppable high swerving shot from about 25yds to send the game into a penalty shoot-out. Park won the shoot-out 4-2. None of the Park boys missed their penalty.

Well done to all the boys and especially to the team managers Mr Bishop and Mr Kingdom-Kruszewski.