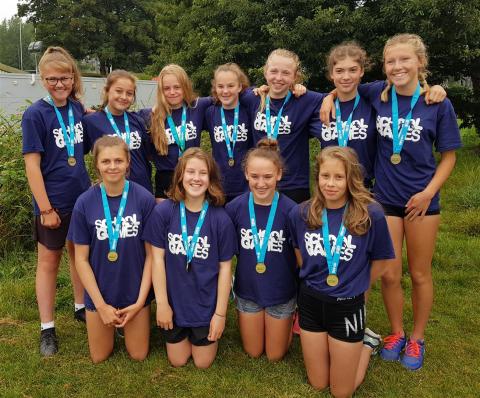 After an unbeaten season in the North Devon league and a well-earned victory in the North Devon Schools Final against Holsworthy (scoring an impressive 10 Rounder’s in 15 balls) the Year 9 Park girls were invited down to Plymouth on Wednesday to represent North Devon in the Devon Summer School Games. The girls put in an outstanding display and played exceptionally well during their League matches, beating Oakhampton College, Torquay Girls’ Grammar School, Colyton Grammar and Plymouth High School for Girls, finishing the league in first place.

They then went on to win their Semi Final against Torquay. This game was very close with the score at the end of the game being 7 all. This meant they had to have an extra 9 balls each to decide a winner. Torquay went first and scored 3. Park were on 2.5 after 6 balls but the pressure did not get to the last 3 girls and they managed to score another 2 to make the final score 4.5 – 3.

The final was also very close against Colyton. Park lost the toss which meant they had to bat first, which is always a disadvantage. They managed to score 7.5 with every girl contributing to the score line. Again Park had already beaten this team in the pool stage so they were aware of how good they were. They had some strong batters in their team but the Park girls adjusted and worked as a team, showing some inspiring fielding skills to ensure that Colyton could only score 6! Meaning the Park girls were now the best Year 9 School Rounder’s team in the County!

What an incredible team and what an achievement for these girls. A huge and well deserved congratulations!