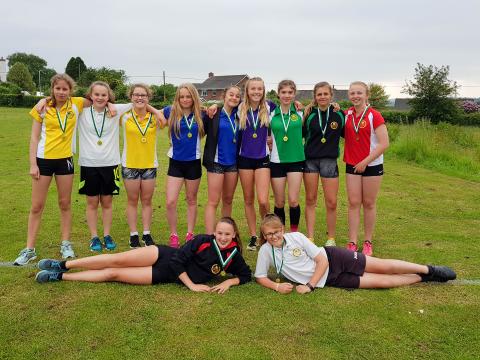 Park were one of seven schools taking part in the North Devon Rounders Tournament at South Molton on 5 June.  The girls faced South Molton and Holsworthy in their pool and beat them both to win the pool (SMolton 5-1 + Holsworthy 6-4) They then played GTS in the semi-finals comfortably beating them 5 and a half to 1).  Holsworthy beat Bideford in their semi final which meant we had to play them again in the final.  Holsworthy have some good batters but the Park girls were exceptional in the final showing their full potential. Amazing teamwork, accurate passing and good backing up by deeps and posts meant that the big hitters found it very difficult to score. Hope also deserves a mention for her consistent and accurate bowling. The girls put in a very strong batting performance, scoring an impressive 10 rounders out of 15 balls beating Holsworthy by 5 rounders.

Individually all of these girls are outstanding rounders players and collectively they make an unbeatable team.

They now go on to represent North Devon in the Devon Schools Games finals on the 20 June in Plymouth. We wish you good luck girls!